BEYOND
AN ADV
CAMPAIGN

In its determination to design and construct lasting explorer vessels which encapsulate the very concept of sailing alongside its history and grandiose feats, Cantiere delle Marche is animated by a real desire to restore strong values and authenticity to the sailing (and yachting) world whilst transcending fleeting fancies and passing passions.
A look at the philosophical roots of Metaphysics will show us that everything stems from mankind's quest to venture beyond the restraints of sense experience in order to attain authenticity and absoluteness, to seek out a boundless and unlimited universe.
In their artwork and poetic vision, both de Chirico and Chagall took a universal approach, presenting the spectator with pictures that subverted traditional concepts about matter and challenged conventional viewpoints.

The Nauta Air and Darwin Class ships have been depicted in all their grandeur out of the water so as to bring to the fore their fine silhouette and essential seafaring functions.
The chosen setting lies on the extreme confines of navigable waters, just outside the Arctic Circle in Greenland. In these inhospitable places, the eye of a Leica M3, the camera used by such photographers as Cartier Bresson to immortalise their travels, captured on film images of hostile areas which are impenetrable to all but a steel vessel, the only way to access their beauty on their own terms.
The visual aim was to place the CdM Explorers on a metaphysical plane suspended between spectacular scenery and sailing theory.

Thus, Cantiere delle Marche redefines the limits of yachting, delivering vessels that free their users to such an extent that the only fetter left is that of their own imagination. 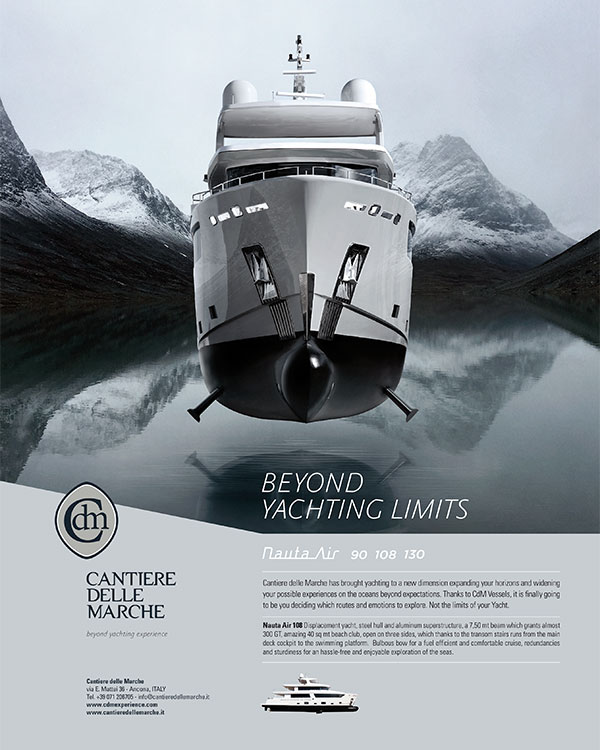 link to article
FOCUS ON: SHIPYARD

UPWARD TREND
ON ALL FRONTS

link to article
FOCUS ON: PEOPLE

link to article
FOCUS ON: SHIPYARD

NEWS FROM CDM:
IN THE WAKE OF SUCCESS